So William Shatner thinks the 50th anniversary of Star Trek should be celebrated with a musical or variety show. Over at io9, Charlie Jane Anders gets behind the idea, and points to an old Mad magazine feature imagining the same.

It’s not that strange an idea. For one thing, it’s not like Star Trek is completely hostile to the idea of doing musical numbers.

Talk of a Star Trek musical is of interest to me, because about 25 years ago I began thinking one up. I didn’t get very far with it, mind, so it never even came close to fruition. It would have been quite silly, the kind you’d perform at a fringe festival or late night at a science fiction convention. The kind that borrows its music from other sources, with lyrics rewritten to suit.

Its premise was that Captain Kirk, having suffered a severe episode of bonkus of the conkus on a recent mission, can no longer remember who or where he is. His doughty crew must help him regain his memory, by telling him about himself and his crew through song.

Because pissing off Paramount’s lawyers wouldn’t be nearly enough, I decided to adapt the songs from Sesame Street.

Don’t get too far ahead of me here, folks.

The musical would begin, naturally, with “The People on the Enterprise,” in which the crew attempts to answer Kirk’s frantic questions, introducing themselves one by one. At least one verse came immediately to mind:

As the musical progressed, each crew member would have their own song. I didn’t get very far with this, but obviously Spock would sing his version of “Being Green”; Sulu’s propensity to call out warp factors would make him a natural to sing “12 (Pinball Animation)” every time the ship got underway. But the highlight would have been “C Is for Chekov”:

(I imagine a supercut of every scene where Chekov was injured, burned, scared, or injected with a Ceti eel while people sing this song. Get on it, Internet.)

For some reason, once Kirk got his memory back, I reverted to Gilbert and Sullivan:

captain
I am the captain of the Enterprise.
chorus
And a right good captain, too!
captain
I’m very, very good,
And be it understood,
I get first dibs on the crew.

But all of the above is unnecessary, because we already have a libretto, so to speak—in the form of John M. Ford‘s How Much for Just the Planet? (Pocket Books, 1987). If they want to do a Star Trek musical, they should adapt this book with all dispatch. 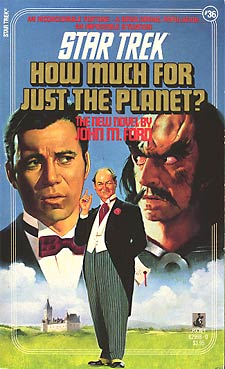 Put aside whatever you think about Star Trek novels; this one is bugfuck. It reads like a Mel Brooks movie adapted from a Howard Waldrop story. The plot is as follows: a dilithium-rich planet has been recently discovered by both the Federation and the Klingons; in order to keep both sides at bay, the residents of said planet adopt Plan C—C for Comedy. When the Enterprise and the Klingons arrive, mayhem ensues. The residents set up farcical situations to entrap the unwary crew from both sides. They randomly break into song. And then the climax: a pie fight. A pie fight.

I can only imagine what Ford’s editor thought when the manuscript was turned in.

Thing is, it’s not that too far off the baseline for Star Trek: a TV show that had “I, Mudd” and “The Trouble with Tribbles”—to say nothing of “Qpid” or “Bride of Chaotica!” in later series—could handle this.

So get on it, CBS Studios.

How Much for Just the Planet? is still available as an ebook: Amazon, iBooks.

Jonathan Crowe blogs about maps at The Map Room and writes and reviews science fiction and fantasy; his work has been published by AE, The New York Review of Science Fiction, Strange Horizons and Tor.com. He lives in Shawville, Quebec.